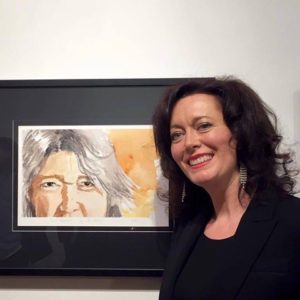 Karin Keays is curator of the art of Australian music great, the late Jim Keays. Together, Karin and Jim were partners in life and in business for over 25 years. As co-owner and administrator of Masters Apprentices Pty. Ltd., Karin acquired an in-depth knowledge of all aspects of the Australian music industry. Throughout their years together, Karin was also co-curator of Jim’s extensive music and memorabilia collection. As Jim’s soul mate, it was Karin who encouraged Jim to pick up his long-neglected brushes and rediscover his love of watercolour painting after they married. Relishing the joy of his return to one of his earliest mediums of artistic expression, Jim was prolific and he created over 150 watercolour paintings and drawings, which he bequeathed to Karin before his passing in 2014. In 2016, Karin laid the groundwork, preparing and carefully choosing Jim’s art pieces in what was to be the first-ever gallery exhibition entitled ‘The Secret Life of a Rock Legend’. This was successfully showcased at Hawthorn Studio and Gallery. Since Jim’s passing, Karin has resumed her career in Business and Logistics. As a talented writer, Karin has once again returned to her passion and love of words. She is a published author and travel writer. Karin lives in Melbourne with their two daughters. 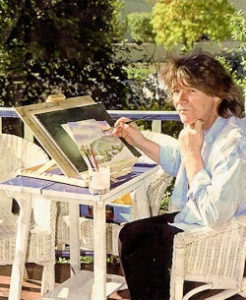 “Jim Keays was a true artist in every sense of the word. A wordsmith, he was best known for crafting lyrics to music, creating songs that became timeless hits – songs that move the spirit of all who hear them. Such a gift would be more than enough for one lifetime but there was more than meets the eye to the man who was my husband and life-partner for over 25 years. Jim was also blessed with an innate talent for drawing and painting delicate watercolours.” ~ Karin Keays

Jim Keays rose to fame as singer-songwriter of rock band Masters Apprentices from 1965 to 1972 with many Top 20 hits in their career. Keays, as a member of Masters Apprentices, was inducted into the ARIA Hall of Fame in 1998. Jim embarked on a solo career in 1972, quickly establishing himself with the release of his first album, ‘The Boy from the Stars’. Jim’s solo career continued with several album releases, including the milestone ‘Pressure Makes Diamonds’ and a re-release of ‘The Boy from the Stars’ on CD. His book biography entitled ‘His Masters Voice’ was released in 1999 and, with Jim’s quick wit and flair for words, was a fascinating and entertaining story and bestseller. From 2000, Jim performed in Cotton Keays & Morris alongside Darryl Cotton and Russell Morris. This trio of rock legends played to sell-out crowds for twelve years until the sad loss of Darryl Cotton to cancer in 2012. Jim had himself been diagnosed with incurable cancer five years earlier, recording two final solo albums before his passing in 2014. A true artist in every sense, Jim loved to paint in watercolours. He quietly enjoyed developing his painting style throughout the years from 1989, leaving Karin Keays with a brilliant and beautiful body of work. A selection of Jim’s paintings was exhibited at Hawthorn Studio & Gallery in 2016, titled ‘The Secret Life of a Rock Legend’.

“… unbeknown to his fans, he was also talented in creating beautiful and evocative watercolour paintings with strong, emotive, powerful and yet often subtle connections to the landscape or subject matter. Within this exhibition we get true insight to the multi talented legend.”